Since November 2018, I have been fighting OnePlus and their shitty support over this phone. Here is my story and a YouTube video to vent my frustration.

To start, it’s a OnePlus 6T purchased directly from OnePlus. I have done many many factory resets. No mods. No roms. No root. Here’s my story so far with my 6T:

I bought it very late in Nov ’18 and received it Dec 5th.

The first issue I discovered was that a lot of background apps were getting killed frequently including Waze. It was fantastic on a long road trip when I discovered that it wasn’t announcing updates. So I called into support. We started with adjusting battery optimization for just a couple apps. That sorta helped. After a couple exchanges they eventually had me disable battery optimization for everything and that generally settled things down.

That’s about when the unreliable text messaging started. I started to realize that text messages were doin one of a couple things:

Support this time recommended a factory reset. Which I did. Within a couple days, it just started all over again.

After a few days of screwing around with it, and with support, the thing I noticed about this time was that some apps that I thought were installed, weren’t. And that I also wasn’t seeing any automatic updates. On my pixel 1 I was used to waking up in the morning to find a few apps updated. I wasn’t seeing that at all. When I was looking closer I realized that some apps just simply never installed. But after a reboot they would suddenly appear as installed. What I figured out was that updates and installs would download without issue, get to 100% and just sit there. Here is a 7 minute video of the issue:

See? It will sit there indefinitely. Like overnight sit there. Eventually it will sorta time out without a fail message. I provided photos and a 10 minute video proving it to support. They really didn’t have anything to suggest other than factory resetting again. Everytime I reset it, I could reproduce the issue.

So support finally decided that I needed to send it back to them to “evaluate it” for up to 2 weeks. Ugh. I factory reset it in preparation to send it back (that’s what the documentation explicitly said). However it reset to some weird black screen that just had a white keyboard on it asking for something like “encryption key”. 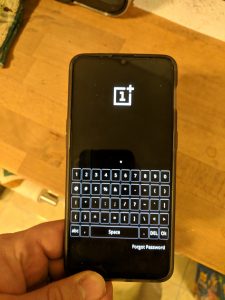 But I couldn’t enter anything that it would accept. The keyboard didn’t like my PIN and everything else was unresponsive. Even the power buttons and volume buttons were unresponsive. I called support AGAIN and the woman I spoke with had no idea what it was. Her recommendation was to allow the phone sit as is until the phone ran out of battery. Took about 3 days. So just to be clear, they wanted met to let it sit with the display on with a fixed black and white image on it until the battery ran out.

With the battery finally dead I packaged it up, shipped it in, and then sat with them for a couple days. The Acer tech “sent text messages and installed apps with no problems” and shipped it back. I unpacked it, started the install and it did the EXACT SAME THING.

I called into support. They suggested factory resetting.

Then I called into support and was put on hold and just ignored. I finally hung up.

I have sent lots of email requests, and the support people have gone completely silent on me.

So I bought a Pixel 3 XL which worked perfectly right out of the box.

I can say that I really have to throw some props out to the XDA-Developers forums. The help that I got over there really moved me forward. One of the things they recommended to me was to do a complete wipe and reload of the phone with the stock OxygenOS rom. They pointed me to the msmDownloadTool which worked like a jiffy. It downloaded the stock rom, cleared the phone completed and reset it. However, the behaviour persisted.

So now I have this expensive brick. If I can figure out how to resolve the issues on the phone I can give it to my wife or I won’t feel bad selling it to recoup a little money.

My rant video. Kinda of stream of consciousness:

OMG they responded to my ticket!! So maybe we are moving a long. They said:

This is what the service center mentioned on their report:

Symptoms: app installation issues, wifi and mobile data issues, text message issuesFindings: IMEI verified through phone – 866241044157579.Unit powers on, has a display, holds a charge and vibrates. There is no damage to back cover. When turning the unit on, was able to download apps, text message send and receive and able to make phone calls. WIFI access and able to use to watch videos and download apps. Contacting Cx for more information. Repair Action: Cx contacted back and stated that 1. Unit would download an app and it would get to a 100% and it would hang there and not say its complete.

The issue might have something to do with your wifi.

So with a lot of fiddling around and testing and, again help from XDA-Developers forums I discovered that there are a number of users that have issues with 5Ghz wifi. That’s extremely frustrating. The recommended resolution is to created a dedicated 2.4Ghz ssid that is separate from the 5Ghz. Ummm I guess that could work as a band-aide but modern wifi design is to overlap the 5 and 2.4 bands with the same SSID. So that doesn’t actually fix anything. I go to work and the phone continues to have issues and I certainly can’t ask my employer to create a dedicated SSID for me. So I don’t know what I am going to do. I updated my ticket with that information but I have had no response from support since the Jan 24th update.

Still no update on the ticket. I lost my sim tray doing all this and I just can’t bring myself to call into the support line and deal with them. So I ordered one off Ebay for 6$.

Holy SHIT they replied back to me finally!! The customer “support” agent asked me what troubleshooting I have done. Good fuck man, there are three months of notes in the ticket. Get off your ass and read them.

Well, I finally found a support person that had experience with the issue I have been having. He claimed to have seen the issue and resolved it with a mainboard replacement. I agreed and he did the work. And holy crap, believe it or not, it completely resolved the issue!!

Just as an update to this – the phone with the new mainboard has been pretty stable now. I’ve handed it off to my wife as her new phone and it seems to be holding up well. So I now consider this issue resolved.

Make sure this account has posts available on instagram.com.